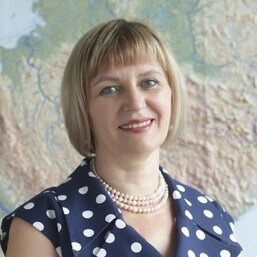 In 1990, she graduated from the Moscow Institute of Technology with a degree in accounting and business analysis.

In 2005, she participated in professional retraining of economists at the Lomonosov Moscow State University.

In 2001-2010, she held senior positions in the financial and economic sector of subordinate organizations of the Ministry of Transport of the Russian Federation.

In 2010-2011 - held the position of Deputy Head of the Housing Department of the Ministry of Defense of the Russian Federation.

In 2011-2012-was the head of the financial and economic department of the ANO "Directorate of the Moscow Transport Hub".

Since August 2019, she started working in JSC "Roscartography" as the head of the Department of Economics and Planning.

From 2020 to the present she is Deputy General Director for Finance and Economics of JSC "Roscartography".

In 2006, she was also given the Star of the Navigator award by the Ministry of Transport of the Russian Federation for her significant contribution to the development of the Russian fleet.

In 2013, she was awarded the V. V. Tereshkova Medal by the Russian Cosmonautics Federation for her services to cosmonautics.